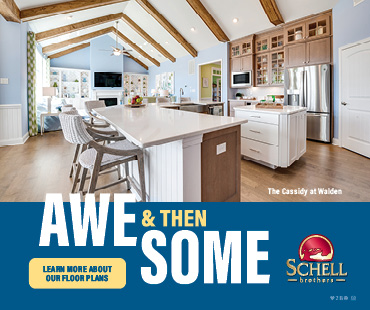 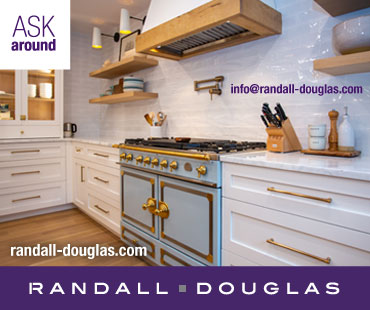 A Wave of Enthusiasm

For skimboarding fans and participants, Dewey Beach is the place to be

By Lynn R. Parks
Photograph by Dan Cook
From the August 2021 issue 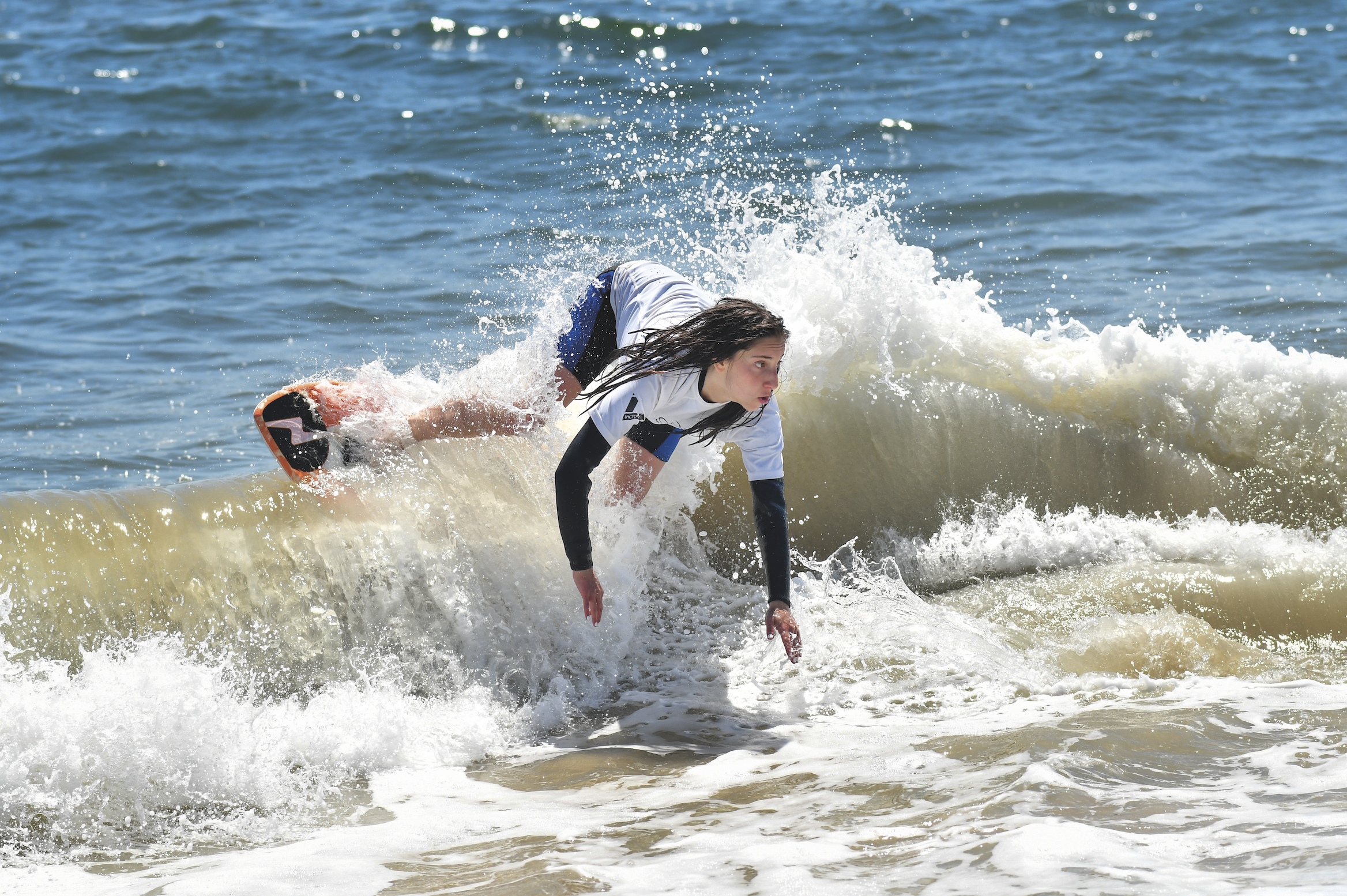 Sydney Pizza has one particular skimboarding move of which she is especially proud, and which she likes to perform during competitions. To start the “front-side, rail-grab bash,” she’s “goofy-footed,” Pizza explains, which means that she’s standing on her skimboard with her left foot behind her right.

“The front of my body is toward the ocean,” she continues, hence the “front-side” in the maneuver’s name. Bending over, “I grab the rail [or edge of the board] and turn and put all my energy into an oncoming wave. I kind of bash it. My goal is to take the momentum from hitting the wave and come back onto the beach. And when I do that, I want to be standing upright on the board, with a huge spray of water behind me.”

Pizza, who lives near Rehoboth Beach, has been skimboarding since she was 6 years old. She started competing 10 years ago at the age of 8, at the Zap Pro/Am World Championships of Skimboarding, the final event of the Skim USA Tour held in August in Dewey Beach. Back then, because there were no women’s classes in her age group, she had to compete against the boys. “I think I was eliminated in the first round,” she says.

For four years, Pizza has also competed as a semipro, against men and women of all ages. In June, she participated in the Vic East Skimming Championships at the Indian River Inlet, sponsored by Victoria Skimboards of Laguna Beach, Calif., and directed by Justin Redefer, owner of Dewey Beach’s Skimboard University. There, she placed fourth in the semipro division.

This month, at the Zap championships, she hopes to win that category: “That’s my biggest goal.”

Pizza’s family has deep roots in Dewey Beach: Her mother’s family has had a house there for 45 years and her maternal grandfather, Angelo Caputo, served on the town council from 1985 to 1993.

Skimboarding also has deep roots in the resort town. Harry Wilson (whose mother, Thelma, served on the town council with Caputo) started manufacturing skimboards in the late 1970s, when he was a teenager, and organized the first Dewey skimboarding contest in 1982. In the late 1990s, he started the Skim USA Tour, which sponsors competitions from March through August, from Florida to New Jersey.

“I was making the boards and I wanted to promote the sport,” he explains. “Plus, I had a lot of customers who were getting good at skimboarding, and they wanted to compete.”

Today, Dewey Beach is known as the Skimboarding Capital of the East Coast. The surfing news website surfertoday.com includes the Sussex town among the top 15 skimboarding spots in the United States. Dewey ranks 10th, behind Dash Point State Park on Puget Sound in Washington state, seven beaches in California and the Virgin River in St. George, Utah. (The remaining spots are in Florida and, at No. 15, Emerald Isle, N.C.)

Wilson, who opened Dewey Beach Surf & Sport when he was just 13, says that when he started making the boards, making Dewey a mecca for the sport was far from his mind. “I really didn’t envision anything — other than having fun,” he says.

Jason Wilson, Harry’s son and a professional skimboarder, now runs the Zap Pro/Am World Championships. He also owns Alley-Oop Skim in Dewey Beach, which offers private instruction in skimboarding as well as surfing and skate-boarding, and is manager of an international skimboarding team sponsored by Zap Skimboards of Venice, Fla.

Both Jason and Harry say that the Atlantic coast along Dewey Beach is perfect for the sport. “It happens naturally that this is a good place because of the contours of the ocean bottom and the way the waves break,” Harry says.

“We tend to have longer waves that break along the shore as opposed to farther out in the water,” Jason adds. That, and the area’s steep beach, “are really good for high performance skimboarding. We also have a nice linear angle to the waves here. They break at a south angle predominantly. And a lot of our jetties and inlets help kind of groom the waves, and give them a really nice shape so you can get a longer ride on a wave down the beach.” (See “He’s Got Pull,” on how Jason manages to get even longer rides, page 47.)

Skimboard University’s Redefer calls those long, rideable waves “liners.” “They’re not found on every skim beach,” he notes. “When the waves are good, there’s nothing better than … catching some shore break in Dewey.”

Aaron Peluso, director of the United Skim Tour for professionals and a resident of Laguna Beach, agrees that Dewey does have good conditions for skimboarding. “But what really sets the town apart in my mind is the long history of the Wilson family and others working hard to promote the sport,” he adds. “Jason (and Harry before him) do an excellent job of running a great skimboarding event and have managed to get many local businesses behind them. The Zap World Championships probably have more local community support than any other skimboarding event in the U.S., maybe the world.”

Rehoboth-area resident Toby West, owner of Eelsnot, a company that makes protective coatings for skimboards, surfboards and boats, is director of the Skim USA Tour. He has been skimming for 30 years, since he was 17, and still competes. “I’m a formidable force in the over-40 club,” he says.

Despite having grown up in California and Hawaii, West loves the Sussex coast surf. “Dewey waves are manageable, but plentiful enough to be exciting,” he says. “And they are near the shore, so they’re accessible. I’ve just fallen in love with skimboarding on the East Coast, more than ever. It continues to become more exciting.”

Much of that growing excitement is because of changes in the board itself. When Harry Wilson started turning out skimboards, they were discs made from wood. “They had very little flotation, and definitely couldn’t float the rider,” he says. Now, they are constructed from foam and fiberglass, and are elongated to resemble surfboards. Many have “rockers” — that is, are curved from front to back to enhance control and speed. With that feature, “people are able to get off the sand and onto the face of the wave, and that turns the whole thing into a hybrid of surfing,” Wilson says.

As the boards have changed, so have the tricks that skimmers are able to perform.

“It used to be, you got on your board, slid a little bit down the beach, hit a little wave and came back to the beach, and that was amazing,” West says. “Now, it’s kids doing aerial 360s and landing on their feet, then doing another trick — stuff I can’t even comprehend.

“I remember when there used to be a trick called the flyaway, where you’d run right toward the wave, the wave would kind of crash on your board, and you would jump and it would catapult you into the air. It was just so cool. Now it’s like, ‘Oh, that’s not cool anymore.’ Now they do that trick, but take the board with them, do a big flip in the air, land back on the board and slide back up the beach. How do they do that? Sometimes I just sit on the beach and watch what they do, and it’s like, wow, if I could have done that when I was 19, or even thought it was a possibility, it would have been amazing.”

“We are seeing kids doing some insane stuff,” says Will Ashmore, a pro skimboarder and Bethany Beach native who placed third in June’s Vic East competition. “I was one of the judges at the Vic East and we all said, ‘These guys are coming for us in the next year or so.’ We were all getting nervous.”

Over the decades that he has been involved in skimboarding, Harry Wilson has seen the sport’s popularity increase, to the point that “it’s through the roof today.” The Zap World Championships attract up to 150 competitors, amateurs as well as pros, and around 1,000 spectators each day. Hundreds of people went to the Indian River Inlet in June to watch more than 50 skimmers compete in the Vic East. (Redefer ranks the inlet beach second-best along Delaware’s coast for skimming, behind — of course — Dewey. Third and fourth are the Gordons Pond beach north of Rehoboth and the area near the naval jetty in Cape Henlopen State Park, he says.)

One reason for its popularity could be that skimboarding is “a super-fun way to enjoy the beach, and get some exercise at the same time,” says Jason.

The sport “is fast and exciting,” adds Redefer. “There are endless amounts of riding styles, tricks and airs.”

But Harry attributes at least some of the sport’s popularity to the fact that it is accessible to anyone who wants to join in or who just wants to watch.

“The action is right in front of your face,” he says. “In surfing, you can see what’s going on, but it’s so far offshore. In skimboarding, you are close to it.”

Accessibility extends to the skimmers themselves. “In Dewey Beach in August,” Harry says, “you can see the top skimmers from around the world. And you can walk right up to them, talk to them and ask for an autograph.”

Ashmore, the pro skimboarder, confirms that: “For kids who come down to the beach in the summer and see us skimboarding, don’t be afraid to come up and talk to us. When I was a little kid and was learning, I was nervous about going up and talking to those guys. But all that we want to do is make the skimboarding community bigger, and make a little kid smile and see the joy that they have — the same joy that I had when I was a kid learning this stuff.”

And that right there, an openness and conviviality among competitors and fans, is at the heart of the sport, Harry says.

“There is never any animosity. In my career, I’ve run a lot of contests, surfing and skateboarding as well as skimboarding. I stopped running many of them because of [troublesome] moms and dads. But I never had that in skimboarding. Everyone is just one big happy family.”

West cites another factor. “The thing about skimming that I’ve always loved is that you don’t have to be good, or cool, or have a certain board, or a certain level of skill,” he says. “Everyone welcomes everyone. The athletes treat each other as family. And it’s never changed. If anything, it’s gotten more family-oriented over the last 20 years.”

Ashmore agrees: “The camaraderie that we all have, and the respect that we all have for each other, is something that I really value about the community and the people who are in it.”