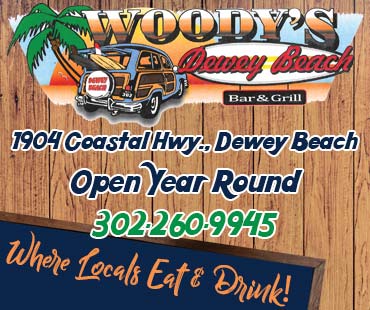 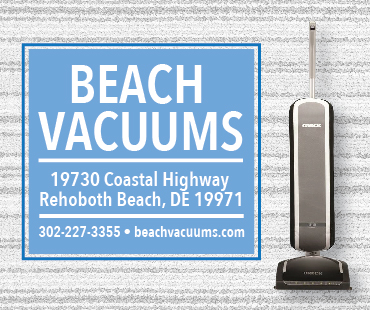 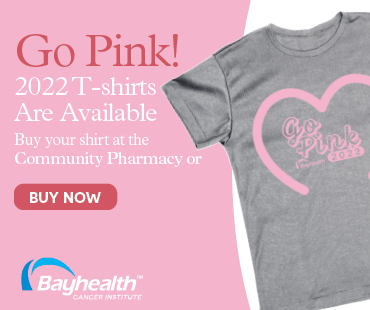 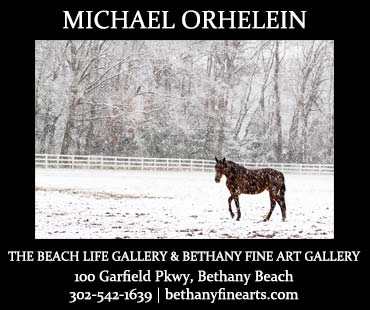 By Lynn R. Parks | Photographs by Carolyn Watson
From the July 2020 issue

The front foyer in Lisa and Ken Arni’s Fenwick Island-area home has numerous doors, including a set of glass-paned double doors. For years, “I tried everything in there, but nothing worked,” Lisa says. “No matter how I tried to accessorize, it never looked nice.”

One day, she read in a magazine about a large house on a European estate that had a painted scene on the walls of one room. “It came to me: That could work in the foyer,” she says.

Damon Pla, an artist with a studio near Ocean View, visited her home, looked at the magazine article, and came up with three suggestions for painting the foyer. They decided to combine all three.

Pla’s painting covers two walls and the ceiling. Three peacocks — one above a doorway, a second standing on the baseboard and a third perched on the chair rail — commune silently while white puffy clouds drift across a blue sky. Predominant in the landscape are classic Italian cypress and olive trees.

Lisa says that the painted foyer — as well as a small antique stand, once owned by the founder of Florsheim Shoes, that’s tucked into an alcove — fits in with the European Old World look that she and Ken wanted. “I have always liked that style,” Lisa says. In addition, “I have all this old antique furniture. It’s hard to have a modern home and furnish it with antique furniture.”

The Arni home is in Maisons-sur-Mer, a five-house development on the bay side of Route 1, just north of Fenwick Island State Park. The couple bought their 3.4-acre lot in 1998 and completed the 6,000-square-foot home in 2000.

The Arnis came up with the house design themselves. “We had a plan,” Lisa says. “But the only thing that was left of the plan when we were done was the front door.”

The master suite, accessed through one of the doors in the painted foyer, has furniture that belonged to Lisa’s grandmother. “I’ve never seen anything else like it,” she says. “It’s over 100 years old and all mahogany.” The dresser has two sets of four drawers with another storage space, accessible by a small door, in between. On top of it sits a pair of antique porcelain figurine lamps — a girl carrying fruit in her apron and a boy holding a sheep.

The master bath suite, as large as the kitchen on the floor above it, has an anteroom with two sinks. Next to the mirrors are open cabinets that hold small collectibles, including perfume bottles and items made from colored glass. In between the sinks as well as in the bathroom proper, in front of the tub, the floor tiles have been arranged to look like rugs. Several tiles were turned 45 degrees to form diamonds instead of rectangles. Then, to fill in the spaces between the diamonds, workers arranged pieces of broken tiles in mosaics. The whole thing is surrounded by a border of complementary tile.

Upstairs, the great room is furnished with a couch and chairs that were in Lisa’s home when she was growing up in Manhattan and the Bronx. “It’s not the most comfortable,” Lisa says. “But my mother loved it.”

The great room is sunken, one step lower than the hallways that lead to it. The hallways are marble, off-white, and the tread of the step features flattened hexagons cut from that same off-white marble and set end-to-end into green marble to form a chain. Green marble fronts the riser.

The green and white marble theme repeats on the mantel in the great room. Alcoves on either side of the fireplace hold decorative items, including miniature paintings that belonged to Lisa’s mother.

The Old World look that the Arnis so like extends to the outside. In the backyard, a formal garden overlooks the marsh and Little Assawoman Bay beyond. Four brick sidewalks lead to a shallow pool, in the center of which stands a statue of a woman. In one hand she holds a narrow-necked pitcher, from which pours water, and in the other is a bowl.

The view to the bay is uninterrupted by phragmites: With mowing and spraying, Ken has virtually eliminated the invasive pest. Once it was gone, Lisa notes, native plants, including milkweed and swamp mallow, made an appearance. “I think the seed was there, just waiting for an opportunity to come back,” she says.

Years ago, when the couple were traveling from their house in Nottingham, Pa., to Ocean Pines, Md., where they had a vacation home, they would drive by Maisons-sur-Mer. “I would say to Ken and the children, ‘Oh, we’re going to live there someday.’ And we would all laugh and say, ‘Yeah, right.’”